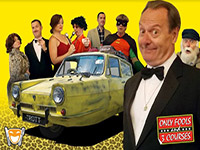 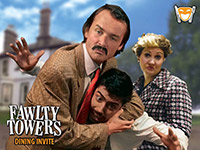 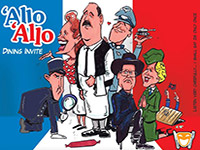 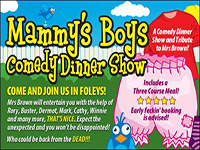 The Dinner Shows are professional comedy interactive theatre where the audience (that’s you) are the diners in a restaurant.

The show begins in the bar over pre–dinner drinks, where the audience are greeted by the characters. Then, when the time comes, you will be invited through into the restaurant where you will be served a three course meal.

The show is half–scripted and half–improvised by the actors, taking place around you whilst they eat. It references all the most famous bits from the original shows whilst having a narrative all of its own.

Ad Fab: An Absolutely Fabulous evening begins with the three girls in the bar, where they appear to be drinking more than the guests. Three of the best comedy actors in the land cause chaos and mayhem the like of which you would not believe.

Allo Allo: Listen very carefully, I shall say this only once… Pop along to this ‘umble cafe for a night to remember as Rene juggles the Gestapo, the Resistance, his secret affairs and his wife, Edith.

Only Fools & Three Courses: Join us for the Dinner event of the year, which combines fine food and comedy action, served up Only Fools & Three Horses style. Marlene & Boycie are hosting a Gala Dinner, but will things go to plan with Del, Rodney and Uncle Albert on the guest list.

Mammy’s Boys: Mammy’s Boys are back in town…”That’s Nice” Get ready for an uproarious night on the lash with the mother of all comedy – Mrs Agnes Brown.

“We had no idea what to expect when we booked on but the evening was absolutely fantastic – absolutely hilarious, the characters were brilliant and the whole room was laughing. I would highly recommend anyone to go along, it’s something completely unique and unexpected and was enjoyed by the whole group – even those that didn’t remember the programme!”

If you’re interested in more information about this act, please send us a message by completing the below form: